The preliminary options assessment studies have led to the identification of the Emerging Preferred Options for each of element of the project.

The project has been divided into sections describing the project in an east west direction, as follows: 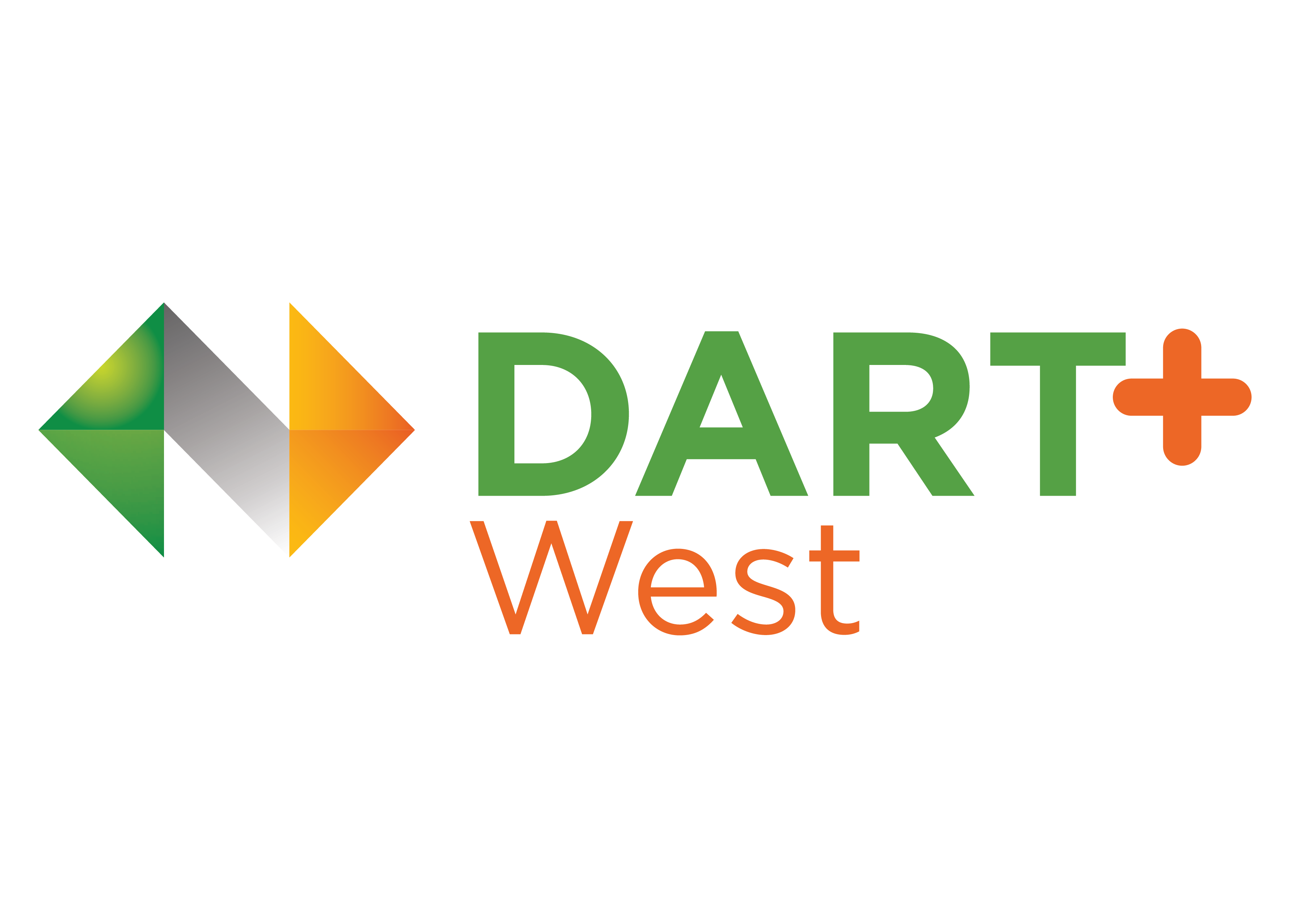 The project will require modernisation and modifications to the existing railway line/linear works in all sections of the project. Some of the key infrastructural works that will be required include:

Connolly Station is one of the main railway stations in Dublin and Ireland and a focal point for the Iarnród Éireann network.  The station today consists of;

The key issue with the current layout is that the terminal platforms are on the east side of the station, whilst the through platforms are on the west of the station. The station capacity is constrained by the number of trains and by track crossing conflicts. DART+ is seeking to modify the northern access to Connolly Station rail lines with upgrades to the existing infrastructure to facilitate the increase in capacity. 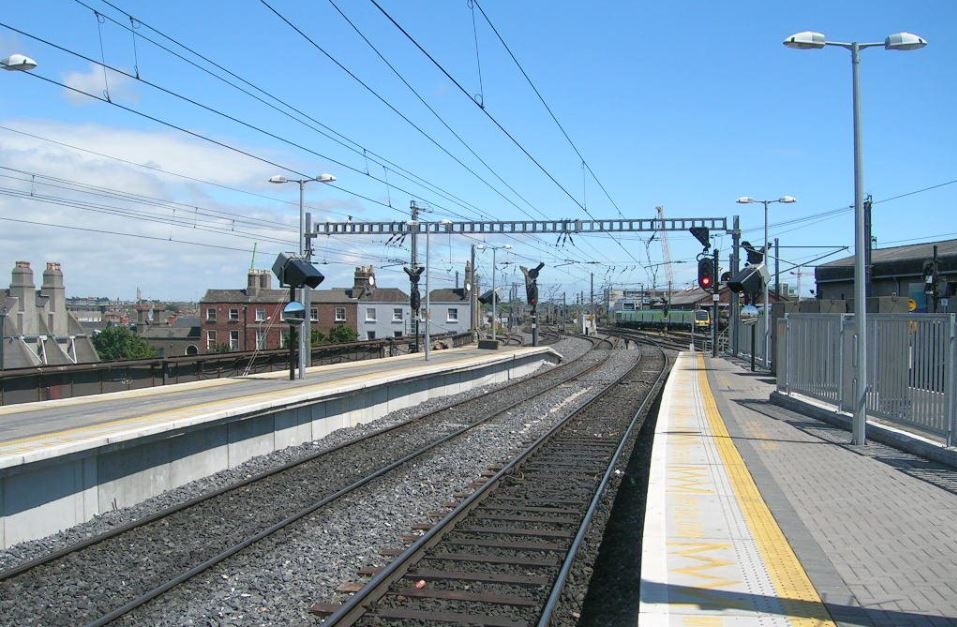 The existing Docklands Station is located southeast of Connolly Station and operates as an overflow terminus station to Connolly Station in the morning and evening peak times. DART+ works is seeking to make more beneficial use of Spencer Dock Station, so that both Connolly and Spencer Dock Stations to work in a more efficient manner together to cater for the planned increased frequency of services that will benefit all GDA routes.

Subject to further assessment, DART+ is seeking to relocate Docklands Station to Spencer Dock adjacent to the Spencer Dock Luas Stop to increase the overall rail capacity in the City Centre, to better serve the Docklands area and to maximise the interchange potential with Luas. 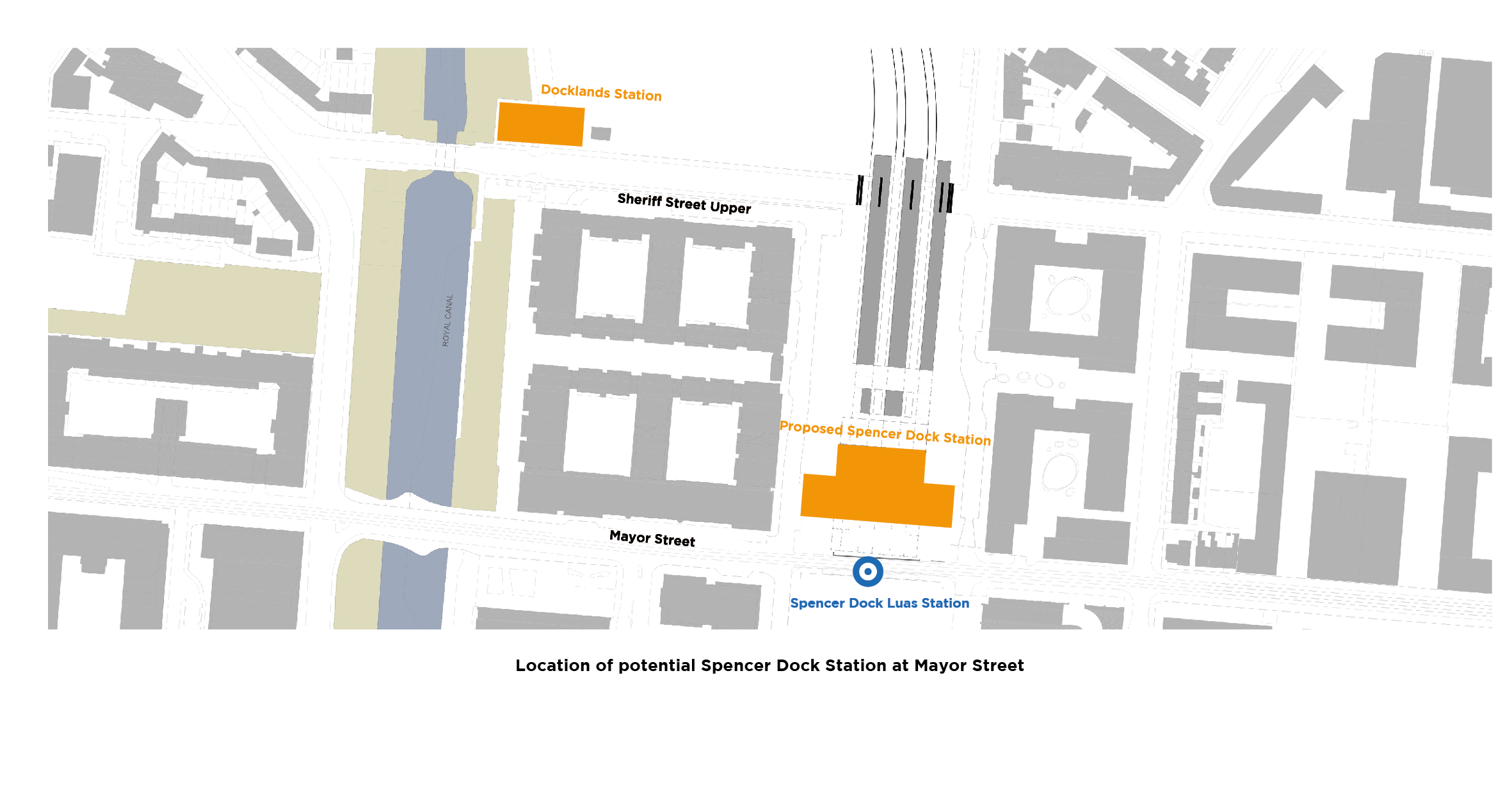 City Centre to Phisborough and Glasnevin

It is proposed that both of the existing lines between Connolly and Spencer Dock to Phibsborough and Glasnevin will be electrified with the installation of overhead electrical equipment, associated upgrades, re-signalling, telecoms, electricity substations and parapet heightening as required.

The two rail lines, the Northern Maynooth and Phoenix Park Tunnel lines converge at Phibsborough/Glasnevin, to the west of Cross Guns Bridge.

At Phibsborough and Glasnevin, a new fully integrated station serving both the DART+ Maynooth Line project and the proposed MetroLink project is proposed. Iarnród Éireann and Transport Infrastructure Ireland (TII) are collaborating to provide this new station which will comprise: 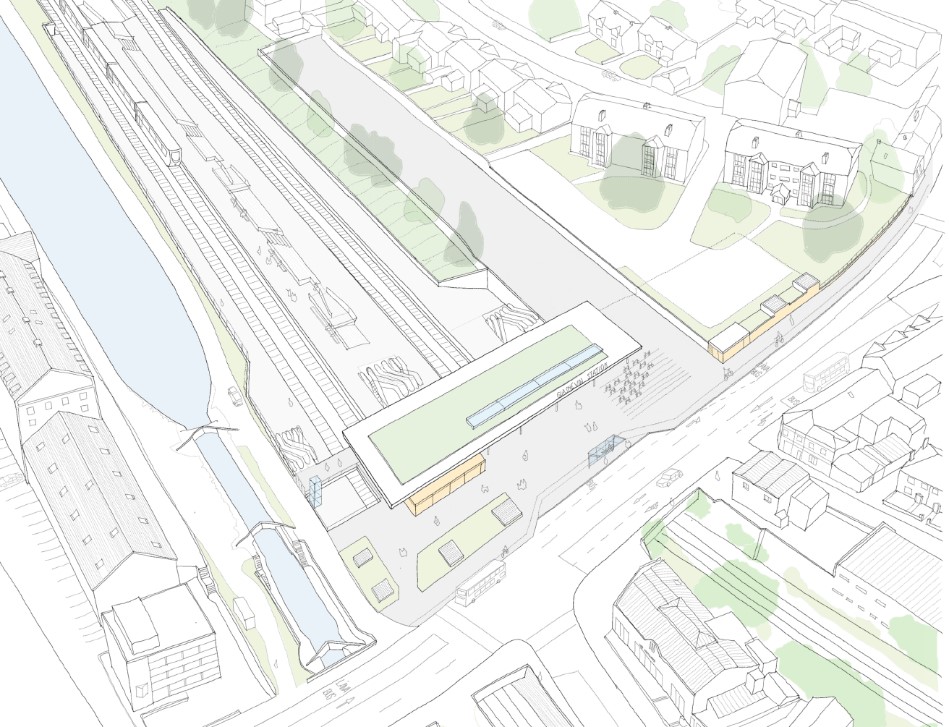 A number of rail overbridges have been identified as having insufficient clearance to accommodate the overhead electrical equipment, for example at Newcomen Bridge on the North Strand Road. Options are currently being considered at these locations such as bridge modifications which are subject to further studies. All other bridges along this section are currently being assessed to confirm clearances and potential works required works at those locations.

Phibsborough and Glasnevin to Clonsilla Station

Between Phibsborough, Glasnevin and Clonsilla Station the Maynooth line runs alongside the Royal Canal. The line passes through Broombridge Station, where it interfaces with the Luas. Travelling in a westerly direction the line along this section includes the following stations: Ashtown Station, Navan Road Parkway Station, Castleknock Station, Coolmine Station and Clonsilla Station.

This section of the scheme extends to the west of Clonsilla Station where the line forms a spur northward along the M3 Parkway line to Dunboyne.

In order to provide a modern transportation network and to achieve the required increase in train capacity it is proposed to permanently close the four level crossings along this section and provide new bridge crossings at appropriate locations in lieu of the level crossing closures.

The following sections outline the option selection process and present, the Emerging Preferred Option to address the level crossing closures with replacement accesses along this section of the Maynooth line. These are described from east to west as follows:

The Emerging Preferred Option provides a new road bridge under the railway and the canal to the west of the existing Ashtown Level Crossing along the line of the Mill lane facilitating new vehicular road. 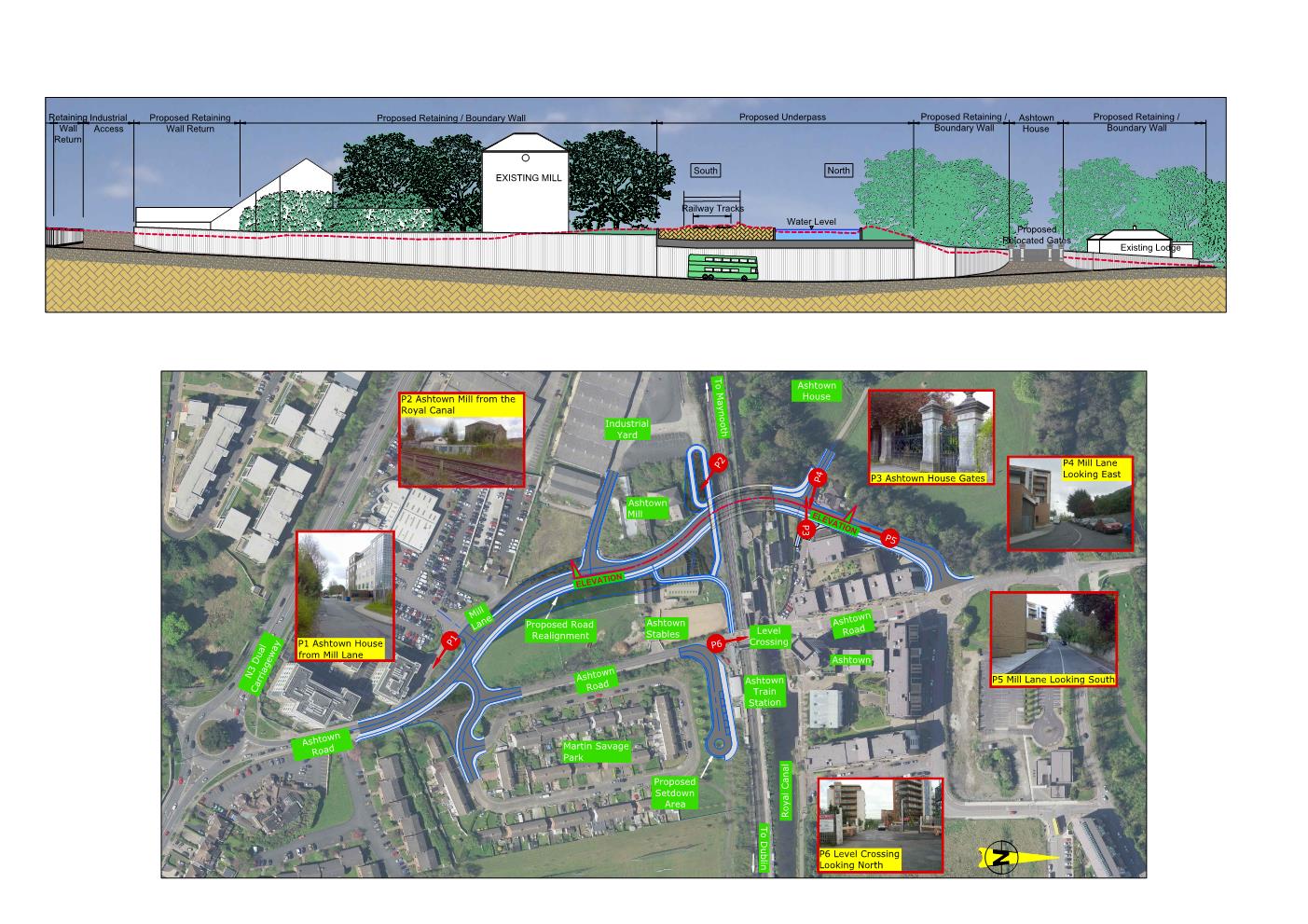 The Emerging Preferred Option provides a new road bridge over the railway line and canal connecting to the north of St. Mochta’s Grove and Station Court and to the south of the Riverwood Court Road. A new standalone pedestrian and cycle bridge will be provided over the railway line immediately adjacent to Coolmine Station. 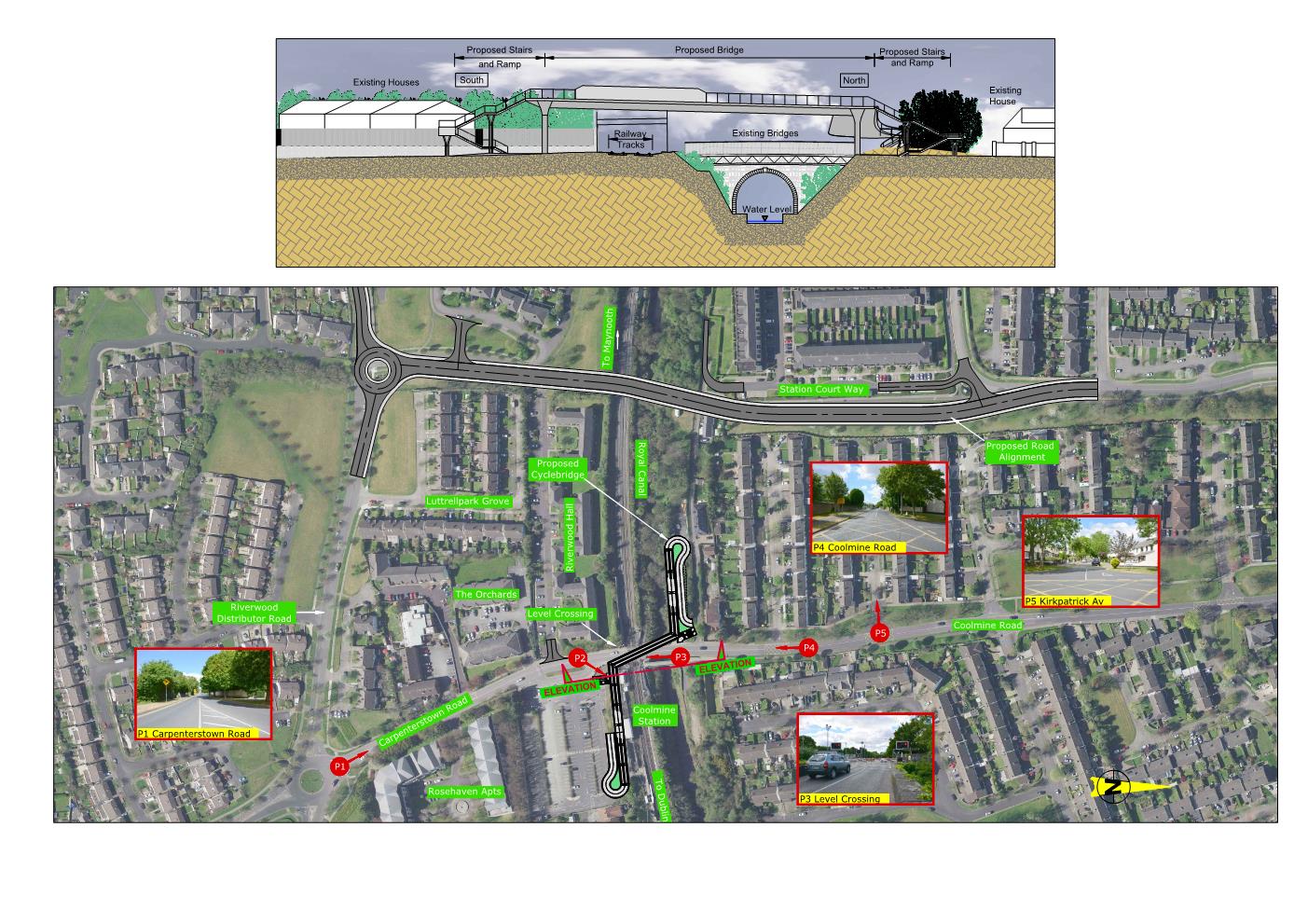 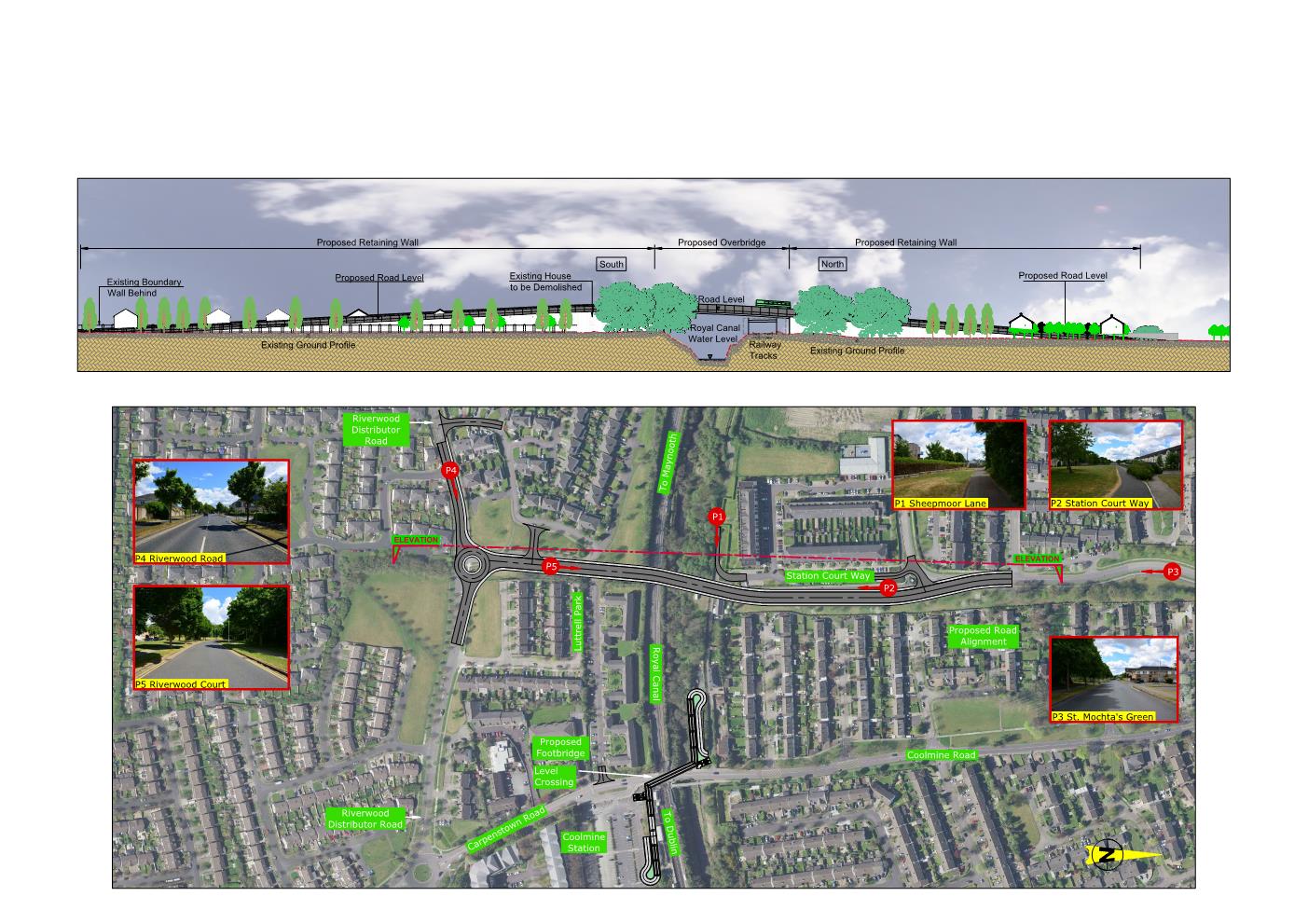 The Emerging Preferred Option provides a new pedestrian and cycle bridge over the rail at the existing crossing. Vehicular traffic will utilise the existing local road network including the Diswellstown Road (R121 at Dr. Troy bridge). 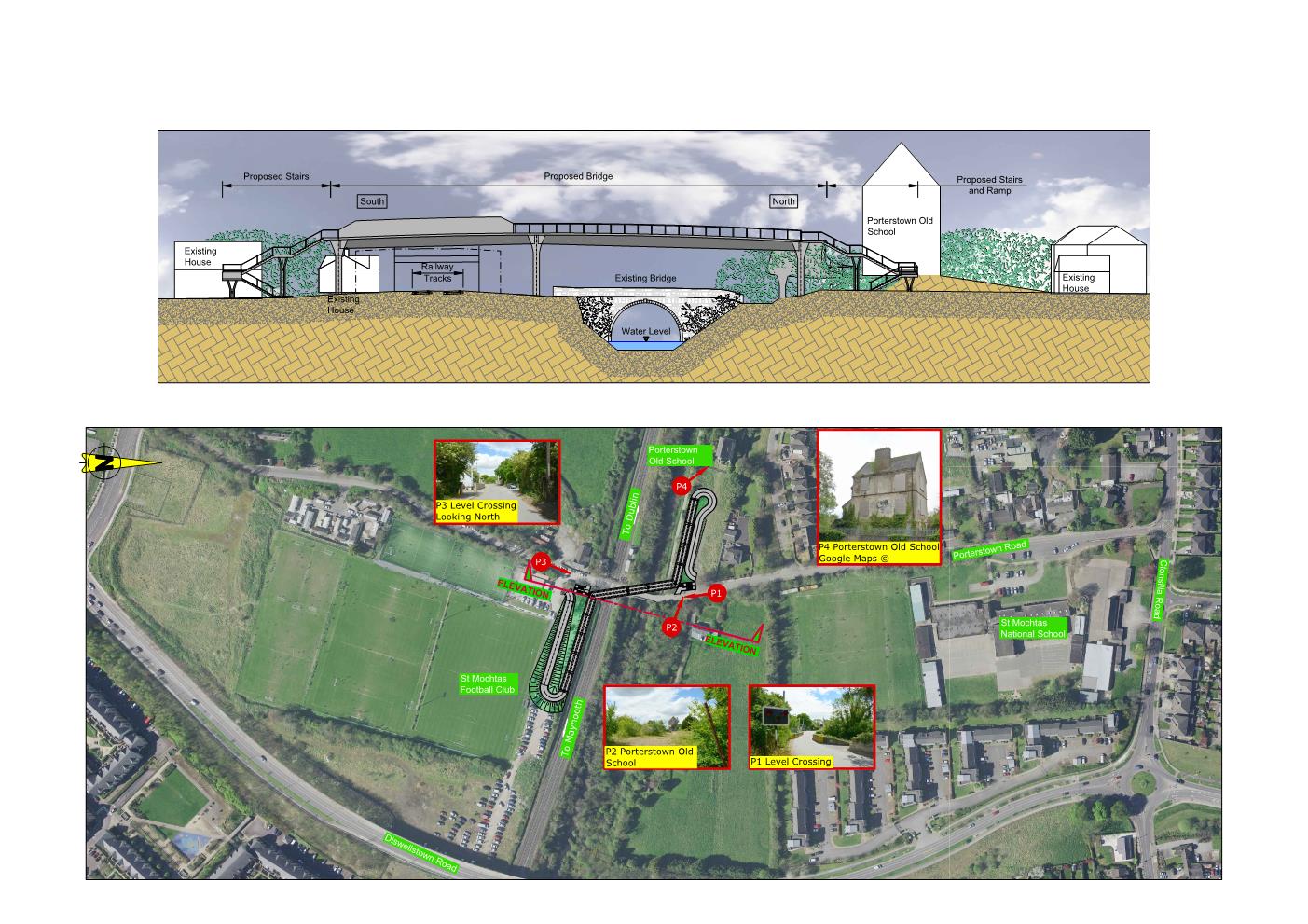 The Emerging Preferred Option provides a new pedestrian and cycle bridge over the railway to the west of the existing level crossing. Given the low traffic flows utilising the level crossing, combined with the proposed new road bridge at Barberstown to the west and the Diswellstown Link Road to the east of the crossing, the optimal solution has been determined as providing a pedestrian and cyclist bridge. 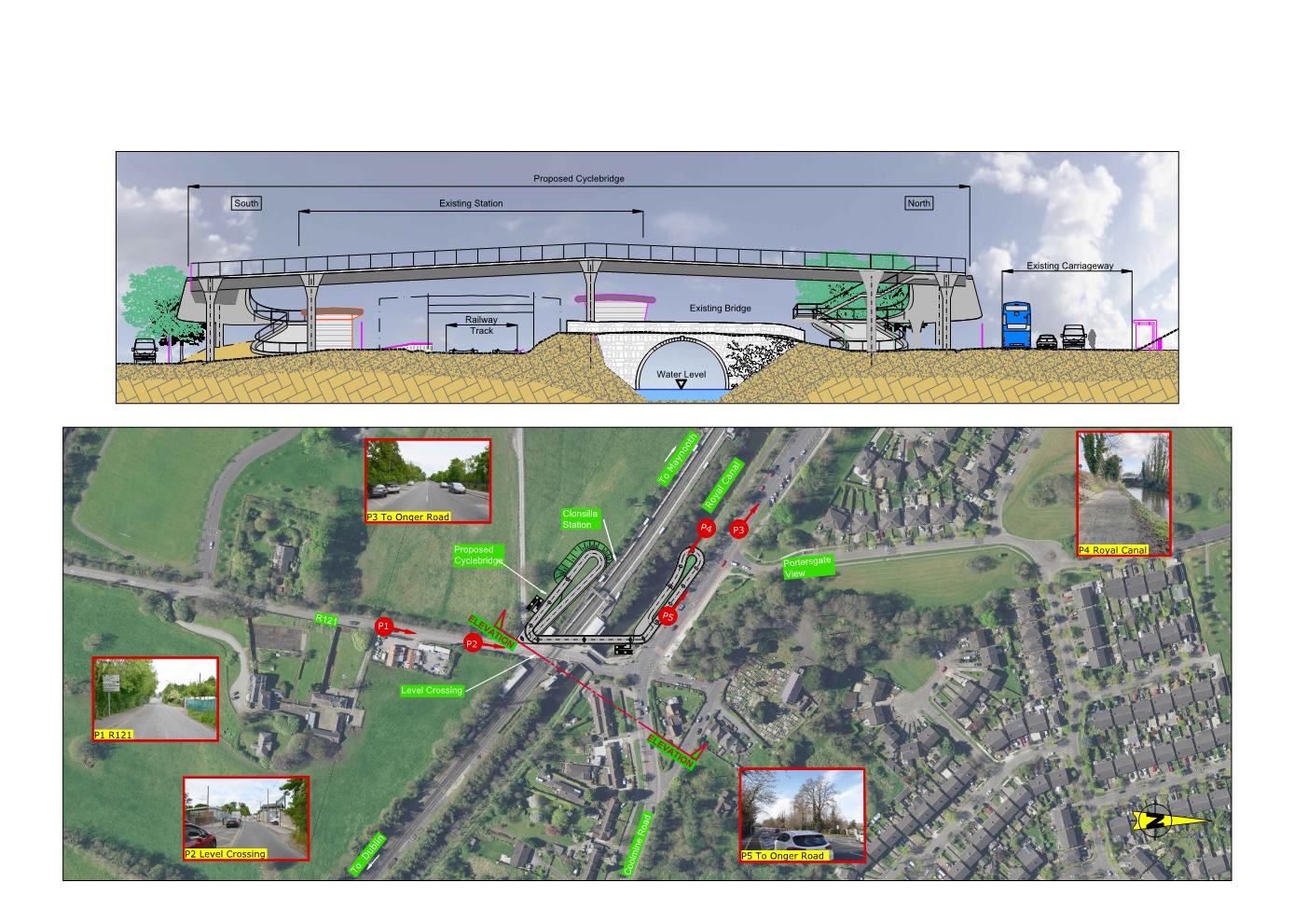 Rail overbridges at Castleknock and Broombridge have been identified as having insufficient clearance to accommodate the overhead electrical equipment a number of options are currently being considered at these locations such as bridge modifications which are subject to further studies. All other bridges along this section are currently being assessed to confirm clearances and required works at those locations.

Between Clonsilla Station and the proposed depot the existing rail line continues parallel and to the north of the Royal Canal, passing through Leixlip Confey Station, Leixlip (Louisa Bridge) Station, and Maynooth Station.

In this section of the scheme there are two existing level crossings which have been identified for closure at Barberstown and Blakestown.

The Emerging Preferred Option provides a new road bridge over the railway line and canal, south of the current level crossing and connecting the existing R121 to the east of the rail to the Barberstown Lane to the west of the rail line.

The Emerging Preferred Option is not to provide replacement infrastructure following the closure of the level crossing. Access and diversions will be via the local road network and R449 to the east of the crossing.

Rail overbridges such as at Jackson’s Bridge (a protected structure) on the L5041 road west of Maynooth has been identified as having insufficient clearance to accommodate the overhead electrical equipment. Options are currently being considered such as bridge modification. which is subject to further studies. All other bridges along this section are currently being assessed to confirm clearances and potential works required at those locations. 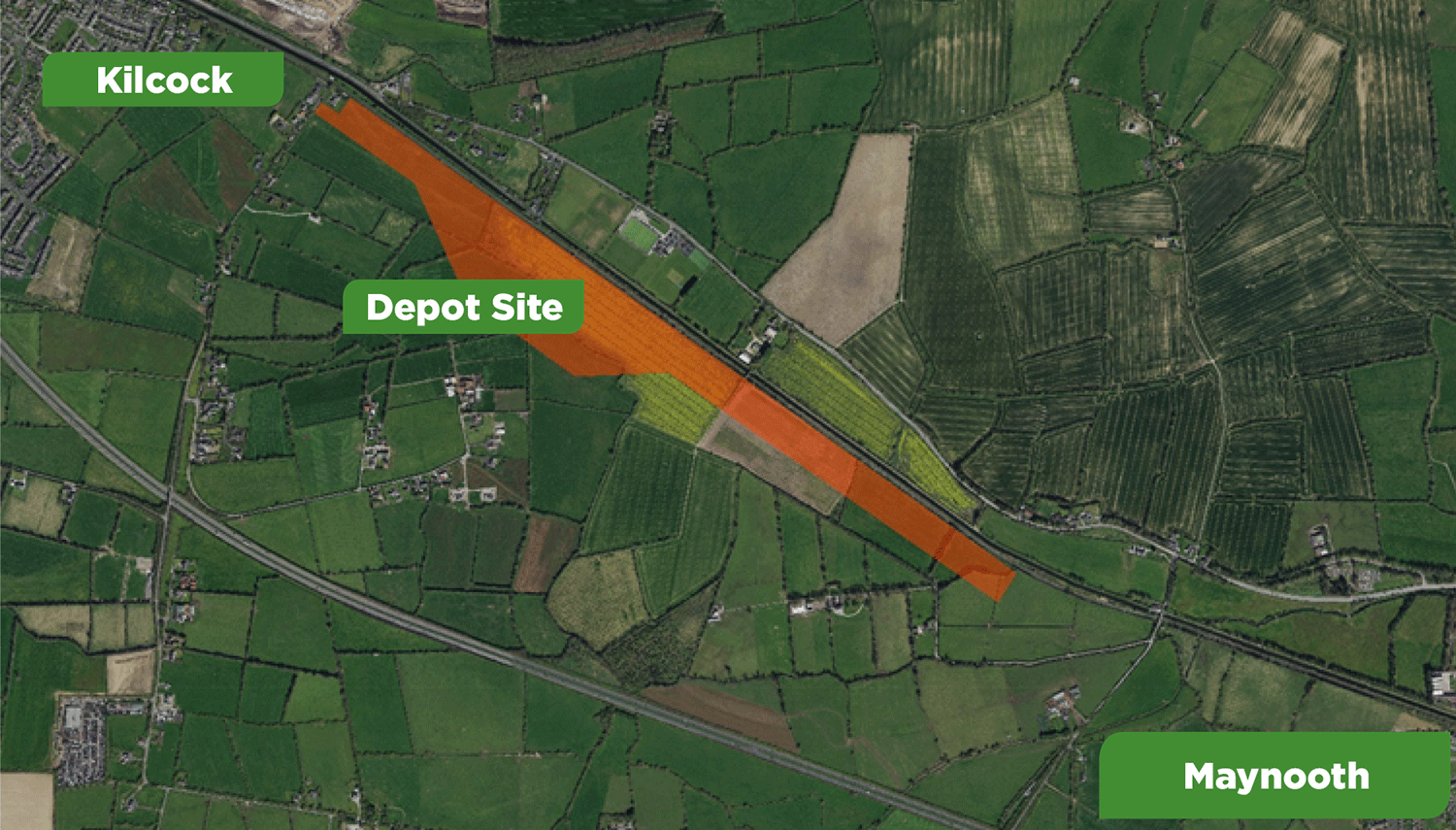 The proposed depot will comprise a main depot building and maintenance shed, office and administrative building, train washing and cleaning facilities as well as other maintenance facilities. It will include a test track, stabling for trains, storage, an electrical substation, staff parking and facilities for staff.

The Emerging Preferred Option for providing access to the depot utilises the existing road network for the majority of route with only minor modifications required.

The access will be from the R148 which will require the demolition of the existing private agricultural over bridge (OB24) and the construction of a replacement wider bridge over the double tracks to facilitate vehicular access. The proposed bridge enables a new connection to the R148 crossing the Royal Canal and the rail line providing the required access to the proposed depot. 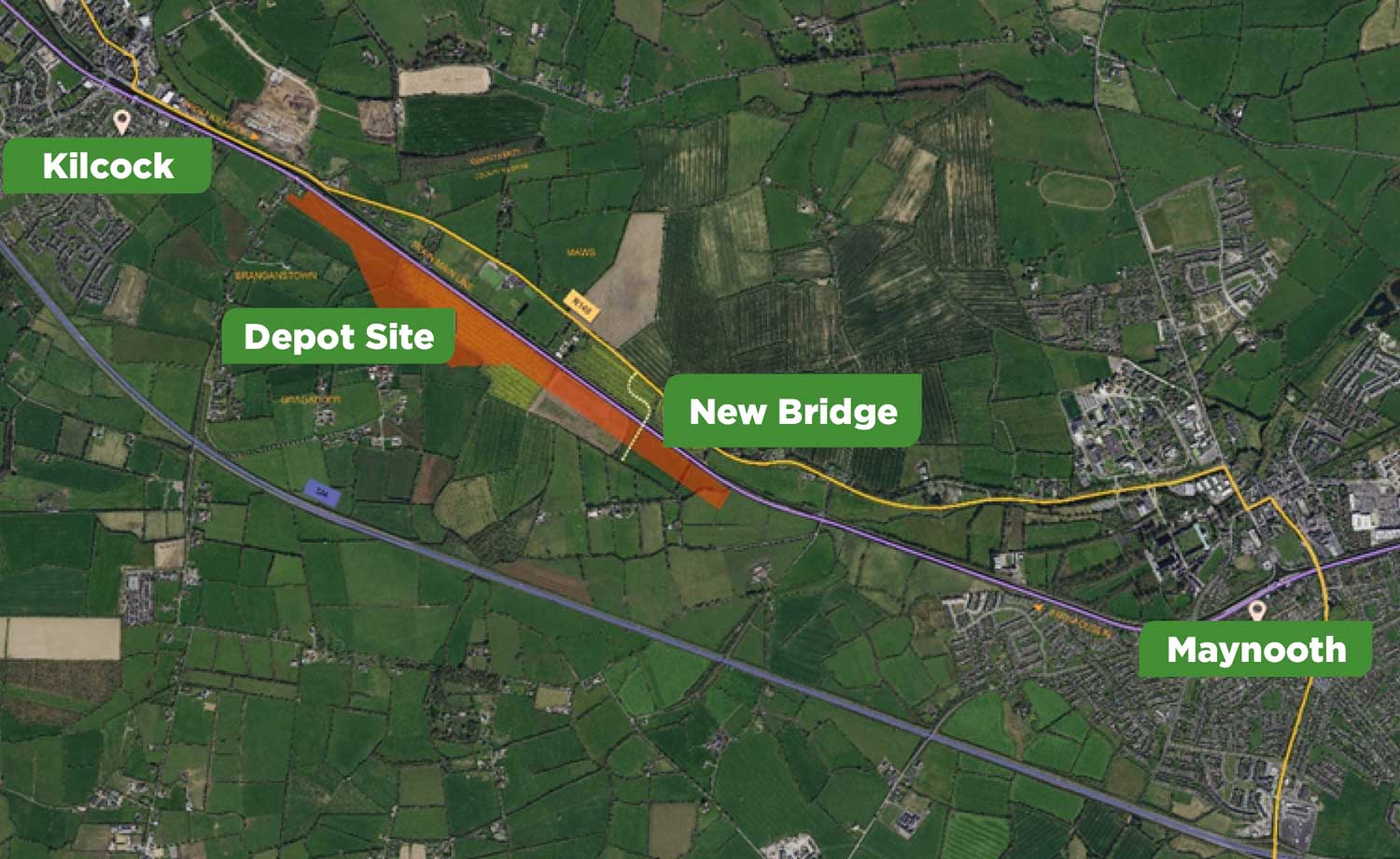 West of Clonsilla Station the line splits with a line continuing out towards Maynooth and a line to M3 Parkway. The M3 Parkway line spurs northwards passing through Hansfield Station and Dunboyne Station before terminating at M3 Parkway Station which lies to the north of Dunboyne and west of Junction 5 off the M3 Motorway.

The line will be electrificfied, through the installation of overhead electrical equipment, associated upgrades of signals and communications, and the provision of electrical substations as required.

A number of rail bridges are currently being assessed to determine the options available to provide the required clearance for the overhead electrical equipment.

This project will have far reaching positive transportation effects by providing a sustainable transport system with increased passenger capacity. This will be beneficial to existing and future communities along the railway corridor and assist is reducing dependency on private cars.

Public participation is a key element to the delivery of major infrastructure projects such as DART+ West.