Iarnród Éireann’s project to renew and replace the roof of Dublin’s Pearse Station has commenced.

The roof structure, which dates from the 1880s, is in poor condition, and protective mesh netting has been in place in the station below roof level in recent years to protect customers and rail services, due to the corrosion which has occurred. Its replacement has been identified by Iarnród Éireann as a crucial safety project.

While the roof is not a protected structure, Iarnród Éireann has specified that the external appearance and character of the structure should be maintained.

The project will cost €17 million and is funded by the National Transport Authority, and will take place over a period of 23 months.

While the vast majority of works will not affect rail services and are also planned to take place at daytime to reduce impact on the surrounding areas, Iarnród Éireann does expect that the station will need to be closed for up to 13 weekends over the 23-month period for round-the-clock works, involving crane operation to install sections of the new structure.

The next weekend of works will take place on the following dates;

Customers are advised that no DART trains will operate between Grand Canal Dock and Connolly Station during the weekend closures. To walk from Grand Canal Dock Station to Dublin Connolly on foot takes approximately 27 minutes. Customers wishing to use public transport can walk over the Samuel Beckett bridge and get the Luas Red Line from Mayor Street (NCI) to Busaras or the City Centre. The closest bus stop is located on the Ringsend road (R802). Customers should walk down Barrow Street towards the Grand Canal and turn right onto Ringsend road, the bus stop is located just around the corner. Dublin Bus services number 1 and 47 will bring customers into Dublin City Centre. 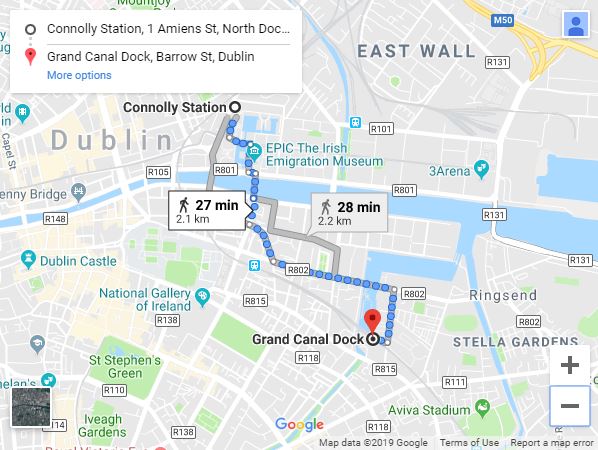 Pearse Station on Westland Row is Ireland’s second busiest train station and the busiest commuter station on the network.  The station opened in 1834, and was the original terminus of the first railway line in the country (Westland Row to Kingstown – Pearse to Dun Laoghaire).

It sees DART, Commuter and Rosslare Intercity services operate through, with up to nine million journeys beginning or ending at the station each year.

The roof structure dates from the 1880s, and comprises two main areas.

The main station area roof comprises forty barrelled roof trusses over thirty-eight bays, with additional gable end structure at both ends. The span of the roof trusses is approximately 28m, with bays spaced at approximately 4.25m centre to centre. The trusses are longitudinally linked by timber purlins along the length of the running shed. The trusses are laterally braced with ties and struts.

The roof fabric of the main station area is divided into 3 distinct sections, comprising:

Adjacent to the main station roof there is a second similar roof over a station infrastructure area. This roof is smaller and comprises nineteen trusses over 18 bays. The span of this second roof is approximately 17m, with bays spaced at approximately 4.25m centre to centre. The roof fabric of this smaller roof is similar to the main running shed.

The main trusses of the roof provide the primary roof support. These trusses are either supported off a spandrel section, its supporting cast iron column or off a brick corbel where there is no spandrel present.

The works will consist of the replacement of all primary trusses with new steel trusses, or similar, and replacement of the existing roofing materials with new materials chosen to maintain the external appearance and character of the structure.

Significant works will also be necessary to separate the works from both the operations of the station and from the surrounding high density area which includes residential, commercial, educational and amenity areas. A crash deck will be installed over the main station for the duration of the works.

Physical works are taking place between September 2018 and July 2020. A total of up to 13 dedicated construction weekends are likely to be required during this time to allow for crane operation. This will require the suspension of train services through the station during these weekends, meaning train services would not operate between Connolly and Grand Canal Dock.

Community Liaison arrangements are in place to engage and consult with residents, businesses and public representatives throughout the project.

Bus Transfers will operate between Limerick and Athenry until further notice