Iarnród Éireann has announced that the projects to develop a new station at Moyross, and to allow increased capacity for train services between Limerick’s Colbert Station and Limerick Junction, have commenced.

Following the confirmation by the Department of Transport last month that Moyross Station will be progressed under the Pathfinder Programme, Iarnród Eireann has confirmed that Atkins, a member of the SNC-Lavalin Group, has been appointed as multi-disciplinary consultants for both schemes.  The projects are funded by the National Transport Authority, as part of Project Ireland 2040, and facilitate the forthcoming Limerick Shannon Metropolitan Area Transport Strategy (LSMATS).

The initial phase of works being undertaken by Iarnród Éireann and Atkins will focus on:

The immediate objective is to identify a preferred location and option for the station itself. 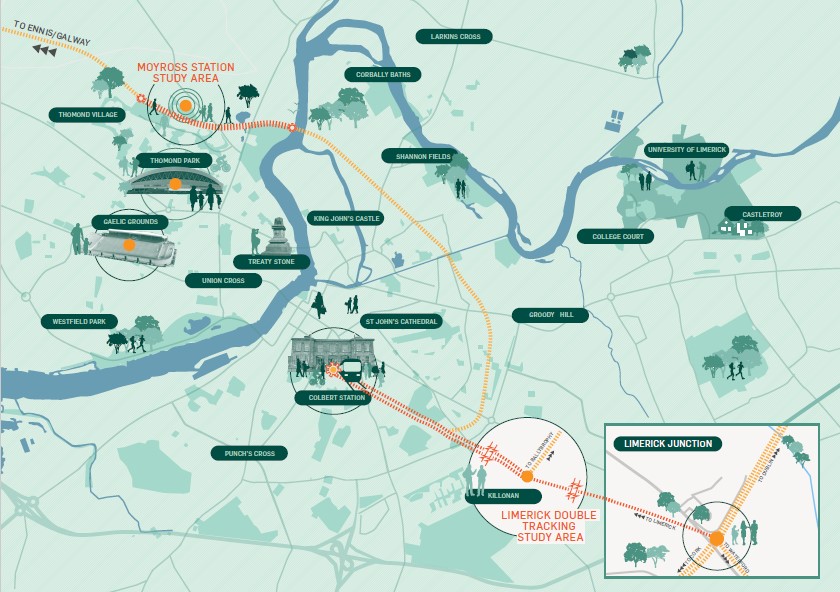 A Station in the Moyross area will support compact growth and provide connection to major attractions of Thomond Park and The Gaelic Grounds, and provide a sustainable transport option for the existing and planned increased population in Limerick.

The area under examination is a 2km stretch of railway, starting at the western bank of the River Shannon, extending 2km to the edge of Moyross, as shown above.

The existing single-track sections of the 35km route between Limerick and Limerick Junction – approximately 80% of the route - restrict capacity for services and lead to increased waiting time on the line.

The initial phase of the project will review options to enhance capacity on the route. It is anticipated that double tracking of the entire line could be required, and this shall be assessed, along with a range of alternative options and solutions to increase capacity and meet the objectives, which shall be determined as the project progresses.

The initial phases of both projects – determining the proposed location for Moyross Station, and decision on the optimum approach to increase capacity between Limerick and Limerick Junction – will be completed in the first half of 2023, allowing both projects to progress.

Iarnród Éireann Chief Executive Jim Meade said “it is a sign of the firm commitment of Government, the NTA and Iarnród Éireann to the delivery of these projects that we have consultants ready to hit the ground running to progress both Moyross and Limerick to Limerick Junction capacity improvements.  We look forward to these projects being the start of a transformation of rail services in the Limerick area under the proposed Limerick Shannon Metropolitan Area Transport Strategy (LSMATS).”

Highways and Transportation Director for Atkins, Tony Mortimer, said “Atkins is delighted to  have been appointed for Phase 1 and 2 on these two projects in the Limerick region and work with Iarnród Éireann to deliver upon the objectives set out in the National Development Programme. These projects aim to improve the local, regional and national rail infrastructure and provide greater connectivity in Ireland. Atkins, a member of the SNC-Lavalin Group, has extensive experience delivering similar projects in Ireland and internationally and is excited to work with Iarnród Éireann to deliver on Ireland’s ambitious transport targets.”