The heavy rail network is a central component of this strategic vision which will ensure an integrated local and regional transport network for the future of Cork city and its surrounds. CMATS will support compact urban growth in a more sustainable way, facilitating modal shift out of the private car and on to public transport. A more efficient, sustainable, low carbon and climate resilient heavy rail network will reduce road congestion and support Ireland’s transition to a low emissions transport system helping us achieve emission reduction targets.

The strategy for heavy rail includes the following:

The Cork Area Commuter Rail programme is the heavy rail element of CMATS and is a transformative rail improvement programme for the Cork Rail Network. Delivering increased train capacity and frequency, providing for more connected communities and a more sustainable transport network, the project represents the largest ever investment in the Cork Rail Network.

The programme involves developments and enhancements to the rail network from Mallow through Cork to Cobh and Midleton and will include the delivery of new rail infrastructure and electrification and re-signalling across the 3 main lines of Mallow, Cobh and Glounthaune to Midleton.

The Cork Area Commuter Rail Programme is being progressed through a number of separate but interrelated projects which will be delivered in specific work packages.

The construction of a new platform at Kent Station to facilitate through running services from Mallow to Cobh/Midleton. This will provide for increases in capacity and frequency across the Cork Area Commuter Rail network. The project is currently in preliminary design and is expected to progress to construction in early 2023. Read more on the Kent Station Through Platform here.

Additional works to support the planned increased services including track reconfigurations, station upgrades and proposed new stations at Blarney/Stoneview, Monard, Blackpool/Kilbarry, Tivoli, Dunkettle, Carrigtwohill West, Water Rock, and Ballynoe. Some of the new stations will also incorporate Park and Ride facilities to accommodate growing passenger demand. This project is at an early design stage and will be developed further in the coming years.

A new train stabling and maintenance depot to cater for an electrified fleet will be built. This project is at an early design stage and will be developed further in the coming years.

The Cork Area Commuter Rail network will be electrified. Whether this involves construction of overhead power lines and the use of electric units or installation of battery charging infrastructure and the use of battery/electric hybrid units, or the use of alternatively fuelled trains is still to be decided. This project is at an early design stage and will be developed further in the coming years.

A new fleet will be required to provide the planned increase in train services. This project is at an early design stage and will be developed further in the coming years.

The National Recovery and Resilience Plan (NRRP) 2021 has prioritised the Kent Station Through Platform, the Signalling and Communications Upgrade and the Glounthaune to Midleton Twin Tracking projects for immediate progress via the EU Recovery and Resilience Facility. These are currently being progressed in tandem by the project team. 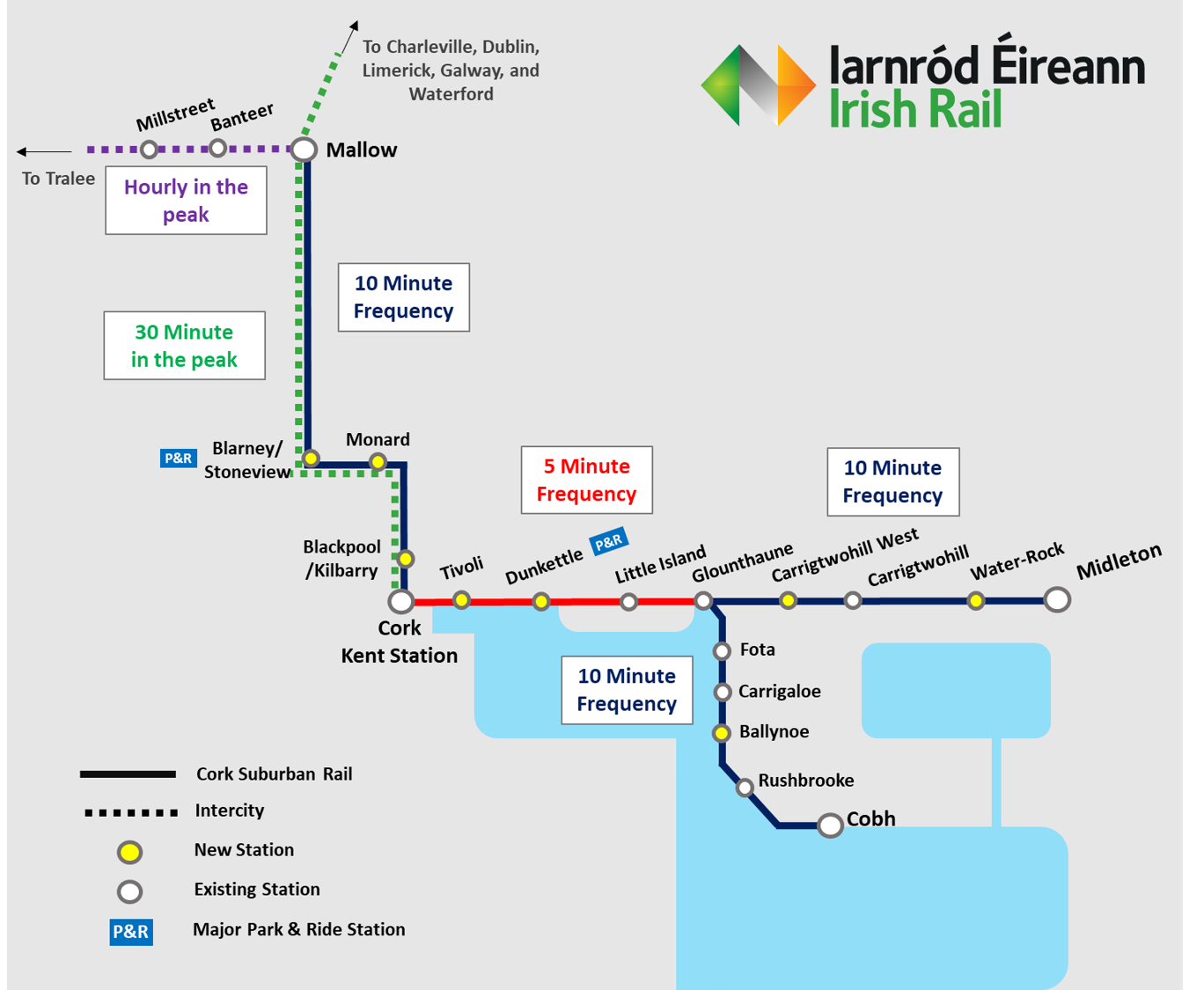